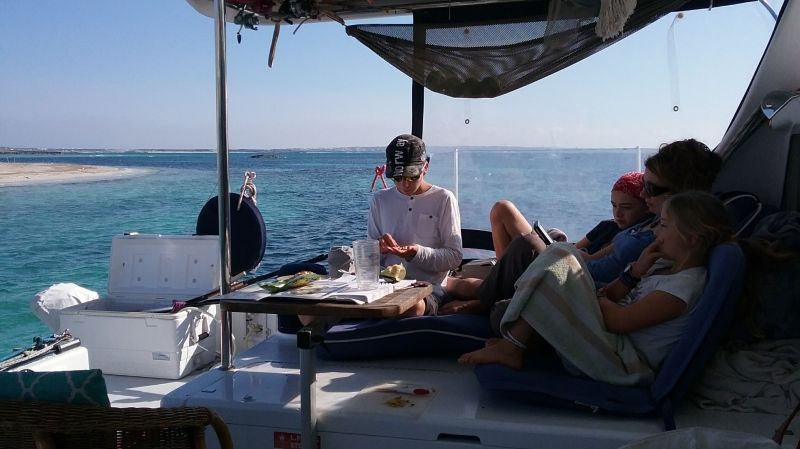 pandemic on their boat in Italy after being threatened with arrest for remaining in Spain, despite arriving there weeks before the country went into lockdown. Gavin French, his wife Valerie Jefford and their three young children -- who have been living on their boat since 2016 -- were on their way to Greece when the coronavirus outbreak halted their travels in Spain. The family decided to travel to Italy last week after being threatened with arrest by Spain's Civil Guard, who French says told them that they had to leave immediately.

"We weren't on a journey anywhere. We were here. We were living in Spain for weeks," French said in a telephone interview with CTVNews.ca on Thursday. "We were ultimately advised there was nowhere in Spain we could go. "It just got so stressful. Every time a boat was seen on the horizon my kids would jump up and go 'Daddy that's the police' and they would ask if they were coming to arrest me. It just wasn't a viable way to live."

French said the family entered Spanish waters in January this year. They were anchored in Portinatx, Ibiza when Spain issued a state of emergency on March 7. The family stayed there for a couple weeks and were able to travel into town for food and supplies.

The family then moved their boat to anchorage in S'Espalmador on March 27. French said Spain's Civil Guard said the family could stay there until the country's lockdown is lifted if they remained on their boat and only travelled to the town of La Savina in Formentera for supplies. A few days later, French said he tried to go into the town because the family was running low on food when Spanish authorities began threatening to arrest him and his family if they didn’t leave for their home port.

But French said sailing back to Canada at that time was not an option. "It's the wrong time of year to be in the North Atlantic. This time of year the westerly gales are still coming from Canada to Europe. I don't think that we would have died but it would have been really stressful, really difficult and really dangerous with three small children," French said.

TRAVELLING AMID A PANDEMIC

French said he looked at a cruisers' website for people who move around on sailboats that listed different countries' rules amid the pandemic. He found that Italy was allowing foreign travellers into certain ports following a mandatory two-week quarantine. "Much like if you've returned to Canada or move around in Canada now from one province to another, they basically said if you can prove that you're going to quarantine for 14 days, you can come to Italy and we'll welcome you but you have to be approved in a marina," French said.

The family is now anchored on an island off of the coast of Sardinia, Italy, as they wait out their quarantine. He said the Italian Coast Guard has offered to bring them food if needed. "It was all really dramatic and strange… But we’re thrilled now. I feel like I want to jump up and down and do like hoots and hollers," French said. "It was really stressful to be pushed out of country when every other country has its doors closed. It leaves you in a pretty tricky spot when you're a long way from home."

French and Jefford are retired surgeons who both practiced in Newfoundland before deciding to permanently live on their boat. The family left Canada in 2016. They have been home schooling their three children, who are between the ages of eight and 12, every morning while living on their boat. French said he and his wife gave up their careers for "various reasons," but it was mainly because raising a family by "two surgeons in one house was impossible." "To be at work enough and to do it the way we want it and to be at home enough to do it the way we wanted to, it just wasn’t working," French said. "That sort of ‘normal life’ of going to work and seeing the kids on the weekend -- it just wasn’t what we wanted. We've always liked to travel we thought it would be enriching for the kids."

The couple offered to volunteer at Spanish hospitals after they heard the country was recruiting medical students and retired doctors due to shortages amid the pandemic. "We're surgeons, not lung doctors and we haven't been working for four years. So in normal circumstances, there would be no way we would work in Spain, but when we heard that hospitals were struggling, I couldn't just sit on the boat and not at least offer to help," he said. French said they contacted various hospitals, medical colleges and local doctors across the country but did not receive any responses.

The local medical association later advised them that there is no need for extra physician help. French said they were made aware of the new novel coronavirus spreading across the globe in early February, but said that they didn't think countries would issue lockdowns as quickly as they did. "When it started I didn't really anticipate the scale that it would get to and I think that's fair to say. We're not in the middle of nowhere or some war-torn state, we’re in Europe and I have a British passport… So we weren't really afraid," French said.

French said locals in Spain brought them food and even wrote letters to local government officials saying what was happening to the family was unjust. French said a lawyer in Ibiza also volunteered to help them. Before travelling to Italy, French was in contact with the Canadian embassy in Madrid. He said his local MP Gudie Hutchings of Long Range Mountains, N.L. also contacted the embassy on his behalf. "I am aware of the very stressful situation that Dr. French and his family is facing. The Government and I are fully seized of this case.

We are working closely with the Embassy in Madrid and doing our best to provide help despite the restrictions put in place by the Spanish authorities," Hutchings said in a statement emailed to CTVNews.ca. "We will continue to do all we can to support Gavin and all Canadians currently stranded abroad." Being a dual citizen, French also contacted the U.K. embassy. However, since his wife and their kids are Canadian citizens, the embassy's response was that there was little U.K. authorities could do for mostly Canadian nationals stranded in Spain.

While French said he was able to easily get in contact with Canadian officials, he said he was not pleased with their responses. French said he wanted help on the ground in Spain, not help returning to Canada. "I can't lie, I wasn't pleased at all. What I wanted was advocacy. I wanted someone to say, 'These people are Canadian, they did what Spanish police told them to do, and now they're being put in a hard spot'," French said. "Maybe it's a naive on my part to think that that would be reasonable, but that was what I wanted." Global Affairs confirmed in an email to CTVNews.ca on Wednesday that it was aware of a Canadian family that requested consular assistance in Spain.

Global Affairs said Canadian officials provided assistance to the individuals in question. Due to the provisions of the Privacy Act, no further information regarding the case has been disclosed. French said Canadian officials offered to help them find somewhere to store their boat and fly them back to Canada, but that's not what the family wanted. "[The boat] is our home. We, we live on this. We don't have a home back in Canada. We never entertained the notion [of returning] because we move around all the time -- it's what we do -- that sort of uncertainty of the unknown and challenges and new things is just part of it. This was just another one of them," French said.

While the family currently has enough food to last their quarantine in Italy, French said he is worried that what happened to his family in Spain could happen again with Italian authorities. "It's all completely unknown because no one really knows what's going to happen. We just have to follow the rules of where we happen to be right now and hope for the best," he said. "Sailing around the coast of Italy is prohibited because they don't want people moving around so until then, we'll be here." French added that if those rules suddenly change, the family will follow the new rules and move elsewhere if necessary.

He said the family was planning on sailing back to Newfoundland in the summer after visiting Greece when waters are safer. However, he said they now have no idea when they'll return to Canada. "It's just a waiting game week by week. I think as people start to emerge from lockdown and see what happens, it's going to declare itself as to what rules are made," French said. "Ideally, we'd like to continue on our plan to go to Greece. But whether that will happen, I have no idea."