Dog owner sailing to the Thames to collect gifts for homeless 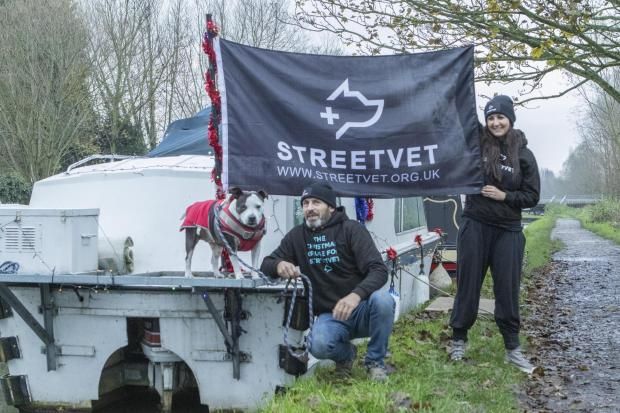 Phil Bradshaw from St Albans has set off for 2 weeks with his 13-year-old Staffordshire bull terrier, Lucky.

He  travelled to the Thames to collect donations of dog toys and food vouchers for the homeless this Christmas.

He made 11 stops before reaching Imperial Wharf in Chelsea.

Phil and Lucky once were homeless and in 2017 whilst staying a hostel discovered his dog had a lump on his mammary gland.

Mr Bradshaw said the homeless charity StreetVet paid for the operation to remove the lump.

He now lives with Lucky in a 40-year-old river cruiser and Mr Bradshaw has become an ambassador and so far has fundraised £5,000 for the charity.

He said: “I was so grateful for the incredible support we received from StreetVet.

"Lucky has been my best friend and loyal companion since she was six weeks old, so the relief was overwhelming.”

Phil said: “Lucky and I would love everyone to come and say hello at one of our mooring points.

“We’d love to spread as much Christmas goodwill as possible and if people are able to donate we would be so grateful.”

At the end, the gifts will be distributed by the charity to pets of the homeless and people with vulnerable housing situations.

StreetVet is run by volunteer veterinary professionals and has helped more than 3,000 pets owned by the homeless.

StreetVet co-founder Jade Statt said: “Phil is an inspiration. He has endless great ideas in which to raise awareness and funds for StreetVet.

“He is an incredible flag-waver for our charity and his beautiful girl Lucky is an amazing mascot.”