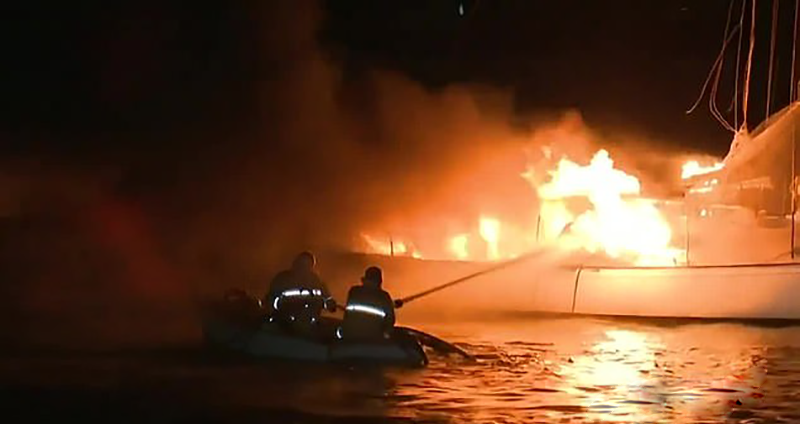 Sydney, New South Wales, Australia - A fire broke out on a 30-foot Sailboat on Parramatta River.

Two firefighters put out a blazing inferno on a boat by rowing up to it with a hose.

Without a large enough hose available, the pair braved the waters of Parramatta River at Lilyfield at 10pm on Friday with nothing but the boat and a water pump.

One steered the dingy while the other battled to put out the flames on the 30ft Sailboat.

Charles Lark, from NSW Fire and Rescue, said : 'We had to improvise as best we could with a davey pump and make our way out to the vessel by rowing.'

Mr Lark said he was 'the lucky one' manning the pumps while his colleague steered the boat.

'I scored the good end of the boat,' he joked.

Video footage showed the firefighters dwarfed by the massive flames - however the pair were desperate to keep the blaze from spreading or the boat from sinking.

Eventually, a boat belonging to the Port Authority filled with firefighters came to assist the two on the dingy.

The crew on the Port Authority's vessel and larger hose brought the blaze under control.

A spokesperson from Fire and Rescue NSW confirmed that crews were called to the scene.