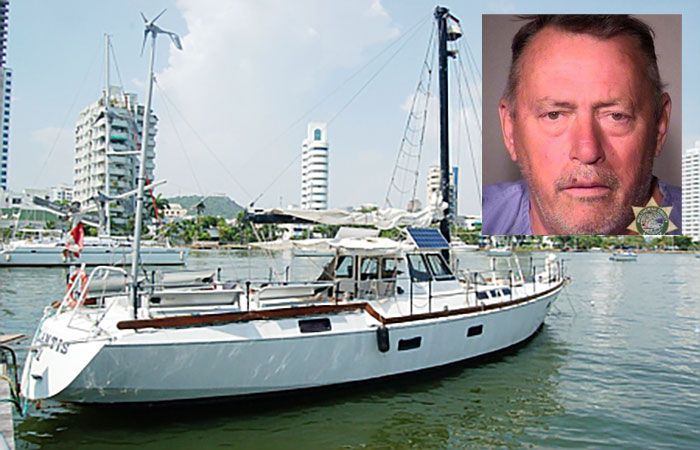 VICTORIA -- A convicted Vancouver Island drug smuggler, who was arrested

aboard a sailboat loaded with jugs of methamphetamine, is suing the United States Bureau of Prisons for allegedly not doing enough to protect him from the novel coronavirus.

John Philip Stirling, 66, is alleging unconstitutional treatment at the hands of his jailers at the Sheridan prison, southwest of Portland, where he is awaiting sentencing after he was caught last April with nearly 750 litres of liquid methamphetamine off the Oregon coast.

"Sheridan prison staff are endangering my life," Stirling says in his handwritten complaint against the bureau, the prison and its staff.

Stirling alleges the prison is "needlessly exposing" he and others in the detention centre to COVID-19 by bringing in new detainees without first quarantining them in isolation.

"I am 66 years old with diabetis [sic]," Stirling writes. "I should be released as death, either mentally or by Corona-19, is inevitable under the present situation."

"We all expect that COVID-19 cases will be discovered at Sheridan and, given the tight quarters, the virus will spread quickly," Hay says.

The lawyer says she has not been able to visit Stirling or other clients since the bureau locked down all prisons on April 1.

“My wife in Canada is sick and the times I get out do not allow me to call," Stirling says. "I have had 4 hours out in the last 19 days."

He alleges the prison guards do not wear protective masks or gloves when they handle detainees. His lawyer says the conditions are causing psychological harm.

"They are kept in two-person cells for 22 hours per day, and are locked in their cells for the entire weekend," Hay says.

"These are small spaces with a lidless toilet, a bunkbed, and limited room for walking," she adds. "Continued confinement in these conditions will cause psychological harm, and I have repeatedly urged the warden to find ways to decrease the population at his facility so that this degree of lockdown is unnecessary."

Stirling was arrested on April 9, 2019, after a routine U.S. Coast Guard patrol picked up his boat, the Mandalay, about 415 kilometres from the Oregon coast.

When the coast guard tried to communicate with Stirling, he "went below deck and would only respond via VHF radio," according to the U.S. Attorney's Office in Oregon.

Coast guard personnel boarded the vessel and Stirling refused to provide identification or vessel documentation, according to the attorney's office.

"Upon further questioning, Stirling’s speech began to deteriorate and he displayed signs of a possible drug overdose," the office said in its initial filings in the case.

A search of the Mandalay turned up 750 litres of liquid meth. Stirling was airlifted from the vessel by helicopter to Astoria, Ore., and later transported to hospital in Portland.

In December, his lawyer argued unsuccessfully to have the case against him thrown out, citing a lack of U.S. jurisdiction over the Canadian man on the high seas.

The following month, Stirling pleaded guilty to one count of possession with intent to distribute methamphetamine under the U.S. Maritime Drug Law Enforcement Act. As part of the plea agreement, prosecutors would recommend Stirling serve just over seven years in prison and forfeit his sailboat, according to the district attorney.

Stirling's sentencing was scheduled for April 20 but was delayed due to court closures with the pandemic. His sentencing is now set for later this month.

Stirling’s arrest came just one year after he was released after serving most of a seven-and-a-half-year sentence handed down by a Florida judge in 2013.

In that case, Stirling had taken a plea agreement on a charge of conspiracy to possess with the intent to distribute narcotics, after admitting to a Southern District of Florida court that he was the master of a vessel containing 381 kilograms of cocaine and one kilogram of heroin when it was boarded by U.S. authorities off the coast of Colombia.