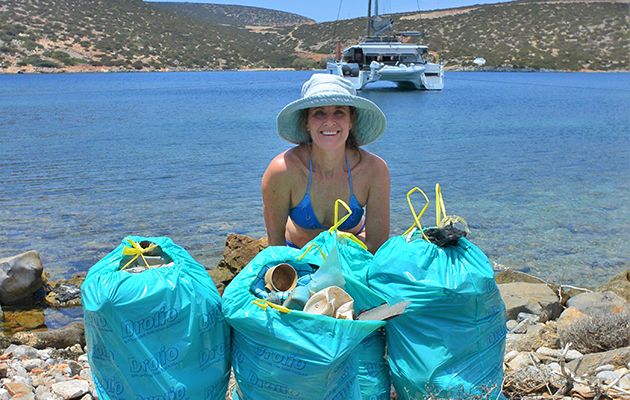 do their bit in the fight against ocean plastic pollution and join them in their Trash Tuesday initiative.

The Cape Town couple, who cruise the Mediterranean during the summer seasons aboard their Fountaine Pajot Saba 50 Lady Roslyn, began the campaign three years ago after they anchored near Russian Bay on Greece’s Poros Island.

‘We had dropped anchor and reversed into a cove with 2 lines ashore. While sitting looking at the shoreline we noticed a lot of plastic water bottles and other plastic trash washed among the rocks and onto the small beach,’ explained Nic.

‘I wanted to make our experience better so I took one of our SUP’s and some plastic bin bags and picked up all the plastic trash I could find along the shoreline. After that experience, I could not stop seeing plastic trash when we anchored, so I decided to keep going and pick it up whenever we saw it.’

Since then the couple have cruised 75 Greek islands and the Turkish coast, collecting rubbish. They soon realised that while the crew of one yacht could make an immediate impact on the anchorage they were moored in, what they were doing was ‘completely insignificant in tackling the global plastic trash ‘tsunami’ flooding into the oceans right now.’ 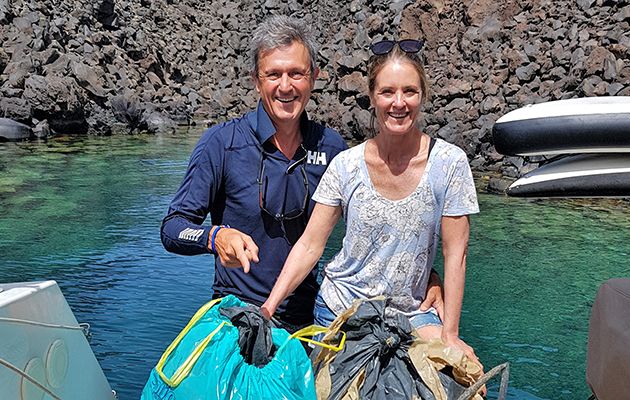 Nic and Catherine decided to contact a cruising Facebook group Med Sailing to try and increase the impact of Trash Tuesday. The administrators of the group adopted the initiative and allowed the couple to post their clean-up efforts on a Tuesday.

Soon, other cruisers were doing the same, sharing their posts with #trashtuesday.

‘We have had a very positive reaction to some of our collections. I picked up 668 bottle caps along one beach in Northern Greece in July of 2019. We shared our “Trash Tuesday” post with the management of the hotel resort nearby and they have subsequently undertaken to send out regular patrols to clean this beach from now on.

‘When we returned to the same beach in September 2019 I am happy to say that the 4 kilometre long beach was almost pristine, so getting others involved has, in its small way already made a difference,’ explained Nic.

The couple have now set up their own “Trash Tuesday” ocean plastic clean-up Facebook group. Nic and Catherine are also encouraging charter companies to adopt the Trash Tuesday initiative.

‘If yacht manufacturers, charter companies, magazines, Sailing communities and individuals join in by bringing competitions, treasure hunts, promotion of regular Facebook and Instagram posts and other innovative ideas to make “Trash Tuesday” fun and informative, we think that the sailing community could make a real impact in this ongoing battle,’ stressed Nic.

An interactive map detailing the Hodgson’s clean-up sites is hosted on their website – ladyroslyn.com – although they are planning a dedicated website for Trash Tuesday in the future.

Sailors wanting to take part are encouraged to:

‘It’s a simple idea where the collective power of like-minded individuals can really make an impact in this ongoing battle against plastic trash,’ stated Nic.