‘Strange’ rescue of sailor trapped upside down in locker 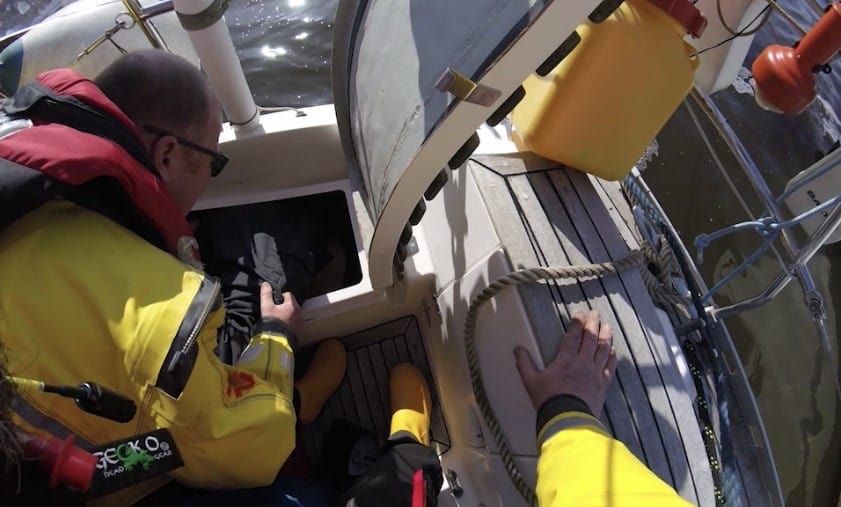 A SAILOR trapped upside down in a storage locker on board

his Sailboat made for an unusual  rescue carried out by a lifeboat crew in Lymington River.

The alarm was raised shortly after 2.30pm, it has emerged, with reports the casualty had fallen and injured himself while carrying out maintenance work.

Responding to a call-out by HM Coastguard, the Lymington RNLI Atlantic 85 inshore lifeboat David Bradley was dispatched on what its helm described as a “very unique” mission.

With the victim, a man in his 60s, stuck below deck as a result of getting into difficulty, it was vital that the rescuers quickly identified his yacht which was moored to the north of Berthon boatyard.

Fortunately, the weather conditions were good, with a fresh force-five north-easterly breeze.

Further information passed on to the crew helped them locate the vessel on one of the moorings. It was essential they found the man fast as he was alone at the time of the accident.

Mooring alongside, the three crew members climbed on board and soon found the casualty wedged upside down in the lazarette, a locker for stowing gear and equipment.

Having carried out an assessment to ensure he was in a stable condition for moving, it took all of them to support and lift him onto the deck of the yacht.

They then provided care on board and, once stable, the man was transferred to the lifeboat before being handed over to paramedics waiting on Lymington Town Quay.

Helm Phil Baker said afterwards: “The sailor was very lucky and he did the right thing by having a phone on his person, so he was able to contact HM Coastguard for help.

“It was a very unique situation which I haven’t seen in my 30 years of service.”

The sailor later contacted his rescuers to express his gratitude for their help.

“Thank you to the crew and lifeboat for getting me out of a difficult situation very professionally,” he told them.

“I don’t think I would have survived much longer and will be forever in your debt.”