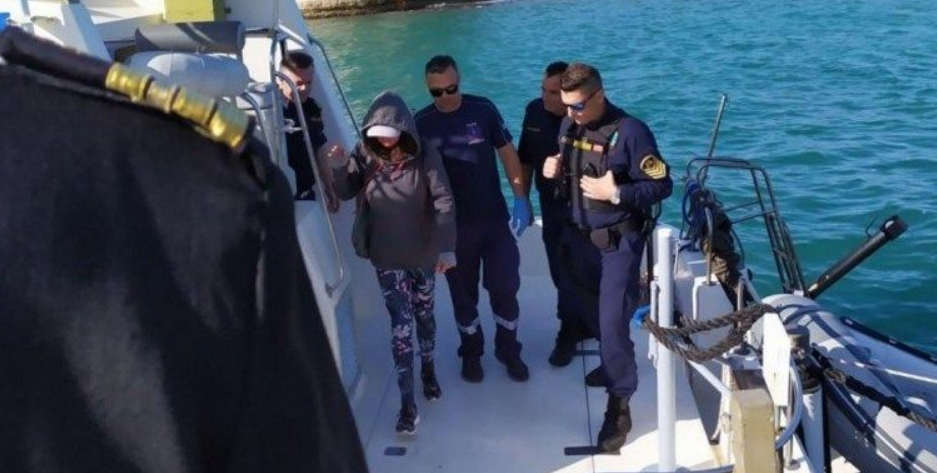 off the coast of Crete wrote the name and phone number of her mother just in case she perished at sea.

Kushila Stein, 47, from Warkworth, New Zealand, was helping transport a yacht from southern Turkey to Athens when she decided to take a dinghy ashore while it was anchored off the island of Folegandros last Friday, the New Zealand Herald reported.

She messaged the yacht's skipper, named only as Mike, to tell him she was returning to the Rival 34 sailboat but when she did not arrive within a few hours, he got worried and called police.

It turned out that she had lost control of the dinghy after an oar went overboard and strong winds pushed her out to sea.

Drawing on skills from her experience as a sailor, she used plastic bags to keep warm and relied on the sustenance of a packet of boiled sweets in her day pack.

She tried to alert overhead planes by pointing a mirror towards the sun, hoping that they would catch sight of the reflection.

An underwater drone, helicopter and six coastguard vessels were deployed and when she was finally picked up, she was 55 nautical miles of Heraklion and 23 nautical miles south of Folegandros.

She was then taken to ­Heraklion, on Crete, and treated for dehydration and is expected to make a full recovery.

Her mother, Wendy Stein, who spoke to her daughter after the ordeal, told Stuff her first words were: "I still have one lolly left, mum."

"She also told me she wrote down my name and number and attached to the dinghy so they would know who to contact if they found her and she was dead.

"She told me: 'I did everything I could to survive'.

"She has been trained in sea survival so is quite competent. I think that might have saved her life," she added.

In September, crew aboard the cruise ship Pacific Dawn rescued three men who had abandoned their yacht after it took on water and were left drifting on a life raft off the coast of New Caledonia, in the South Pacific.

Ben Johnson, one of the three seafarers, talked  about his relief when the P&O vessel dispatched a rescue boat.

Onboard Lifestyle added a video. 18 hours 3 minutes ago

Terence Dins has a new avatar. 20 hours 59 minutes ago