|Video| 24ft Sailboat was pinned against a chain ferry 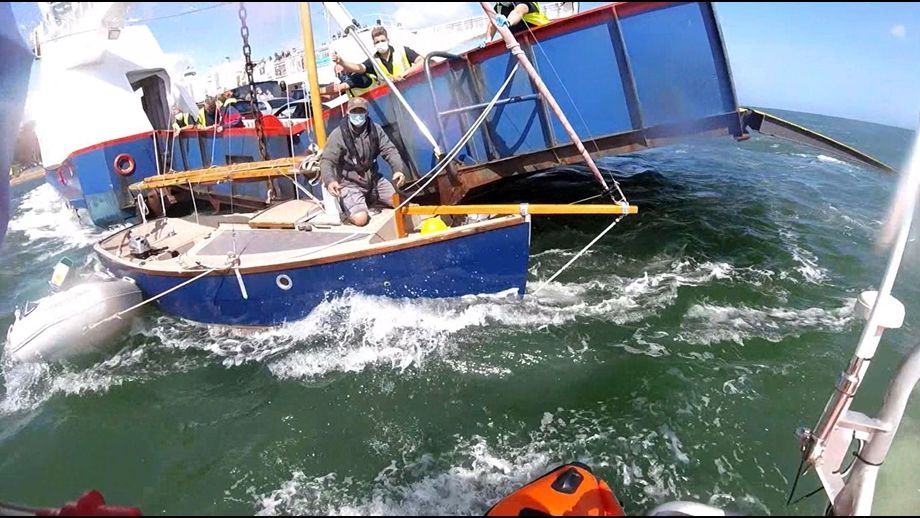 Father's Day was interrupted for members of the RNLI

as they pulled off a dramatic rescue of a yacht pinned against the Sandbanks Ferry.

Video footage of the incident has been revealed by the lifeguard rescue team.

Two lifeboats from Poole RNLI were launched just after 3.30pm yesterday to a report that a 24ft yacht was pinned against the chain ferry.

The yacht, which had two people onboard, had become entangled with the chain ferry on the inside of the harbour entrance as the ferry was heading to the Sandbanks side.

Conditions in the harbour were choppy with a strong ebb tide and a fresh south westerly wind. The combination of the tide and the wind hampered any chance of the vessel getting free.

The vessel was hung up on the side of the ferry, with the staves of the mast snagged onto the ramp and the tide pushing it against the prow.

The lifeboat approached to have a closer look to assess the situation and to make sure that everyone was accounted for and not on the vessel.

The chain ferry was stationary as the lifeboat crew put a plan into place to recover the vessel.

A tow rope was established to pull the stricken vessel clear and it was eventually towed back to the steps at North Haven while the chain ferry resumed back to the Sandbanks side.

Miraculously, the crew checked to see if the yacht was seaworthy and it seemed unscathed bar a bit of superficial damage.

They took the vessel back to its mooring just off Brownsea Castle, where the crew secured it and the casualties were happy to make their own way back via their tender.

Both lifeboats returned to station after a thorough clean and refuelling and were ready for service again by 5pm.

Volunteer Helm Jonathan Clark said: "The conditions played a part in the incident today, with a strong ebb tide and a gusting south westerly wind, it really did not help the situation. The elements can be unforgiving."