I had signed up for the second leg of the Clipper Round the World Yacht Race said Sadie Whitelocks.

"I was currently being bashed around somewhere on the South Atlantic on a 70ft boat, on the way from Punta del Este in Uruguay to Cape Town, South Africa – a distance of around 3,600 nautical miles."

Here is  how she  described her journey in her own words

For the 16-day voyage, we had no shower, only a hand pump toilet and we had to operate on shift patterns – 4 hours on, 4 hours off. Sleeping was also in shifts and we had to ‘hotbunk’ – share a bunk bed with the other watch group. We had a very limited luggage allowance and I’d managed to strip back my packing to the absolute minimum, with just 4 pairs of underwear and a warm hat among my most trusty possessions. Before we left Uruguay, the founder of the Clipper Round the World Yacht Race Sir Robin Knox-Johnston (the man who single-handedly completed a non-stop circumnavigation in 1969) said that where we were going was ‘somewhere where most people haven’t been’. Just a few days into the race, I understood what he meant.

There wasn’t another vessel to be seen as we charged through the waves and there were only a few birds brave enough to surf the whipping winds. As we learned a bad storm was set to hit (up to 70 knots / 80 mph of wind), an ominous feeling grew. The screens in the navigation room glowed bright red, signalling the bad weather. In a bid to keep ahead in the race, we opted to ride through the eye of it. Katabatic winds like machine gun fire peppered the waves with pock marks, before rapidly retreating, preparing to come back for the next round of fire.

At times, the sun attempted to shine but was smothered by grey. The wind howled, reminding me of the haunting cries of monkeys I’d heard in the Amazon jungle, and it whistled through the sails like blows on a panpipe. As 9 metre waves rolled towards us, I thought to myself, ‘if there be a hell, let this be it’. As fellow sailor Diego from Colombia said of the weather one day: ‘It felt like I was drunk, blindfolded and trying to fight five people.’

As I tried to sleep, waves pummelled the boat, sounding like bomb blasts. I was in the top bunk, so my head hit the ceiling when the boat lurched. I had to wedge my mattress against the thin lee cloth to stop myself falling out. Condensation dripped from the ceiling as the days went on, meaning everything was damp, even the inside of my sleeping bag. As our voyage continued and sleep deprivation set in, tempers frayed among the crew and there were heated words exchanged and tears at times. 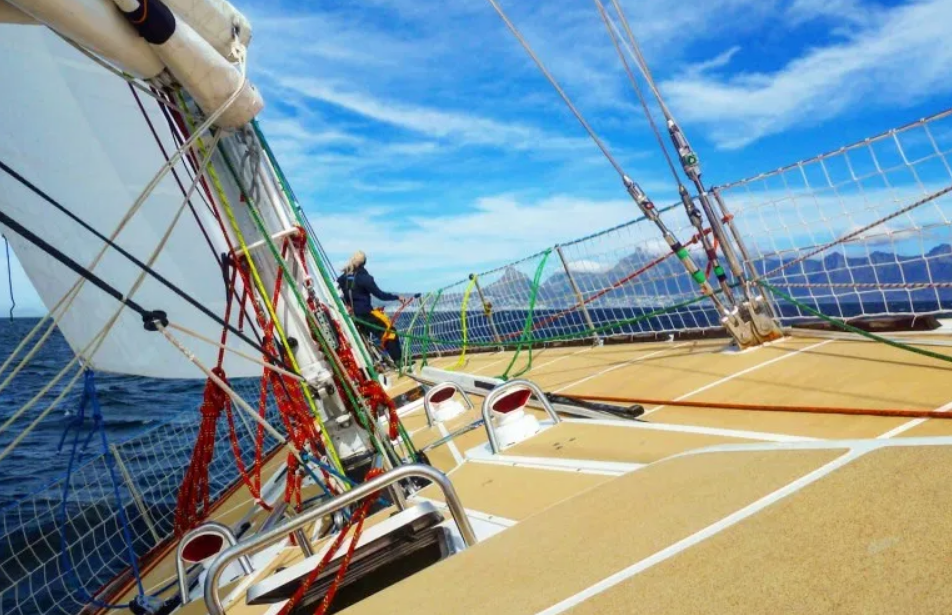 I’d been warned before setting out that the Clipper Round the World Yacht Race is 80 per cent about the people and 20 per cent about the sailing. I could see this was totally true. It’s a pretty crazy social experiment! There were 23 people on our boat Punta del Este (sponsored by the namesake city we left from in Uruguay) for Leg 2, with the youngest being 24 and the oldest 71. Many of the crew were Spanish, including our bubbly skipper Jeronimo Santos Gonzalez, which meant there were language divides at times. The main issue though was living on top of each other.

In bad weather, there was nowhere to hang out other than the saloon and we all filed in like penguins, our damp, unwashed bodies rubbing against each other. Halfway through the trip people started coming down with flu, including myself, and we all put more effort into trying to reduce the spread of germs with extra pumps of the hand sanitiser and coughing into our elbows. Sea sickness was also a constant curse, although it was worse for people at the beginning of the voyage and everyone gradually got their sea legs.

After 16 days at sea, I can safely say the voyage across the South Atlantic on Leg 2 of the Clipper Round the World Yacht Race was certainly an experience I will never forget. I wouldn’t describe it as ‘enjoyable’, but for me, many of my best adventures are those that don’t seem enjoyable at the time, but you feel a great sense of achievement afterwards. At the end of more than two arduous weeks, we’d crossed a vast stretch of water where very few people in history have been before.