Woman injured and rescued from a sailboat on the breakwater | Video | 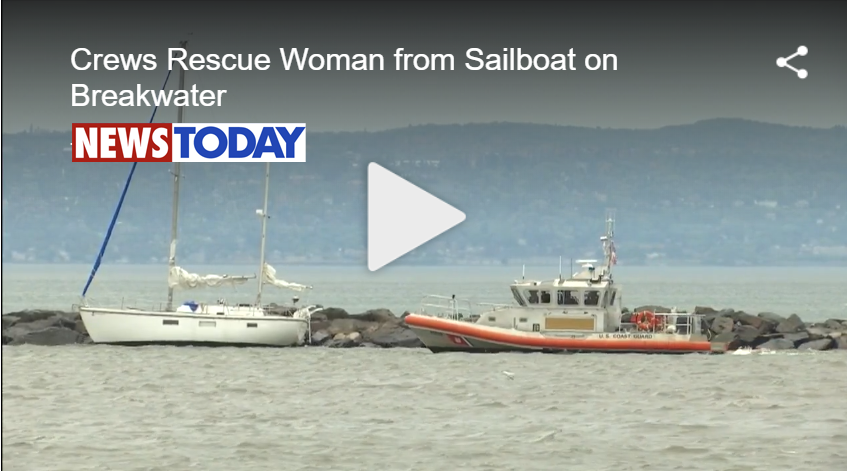 on the breakwater at the end of Park Point on Wednesday afternoon. [ Duluth, Minnesota ]

The St. Louis County Sheriff's Office said she is from Minneapolis and was attempting to dock her sailboat, which had drifted into Lake Superior.

A man on the Wisconsin side of the entry told WDIO News that he called 911 to report that the woman was on the breakwater waving her arms and screaming for help.  The sailboat appeared to be on the breakwater's rocks, but Assistant Chief Brent Consie told WDIO that it is not immediately known exactly how it ended up there.

"We have stiff south-southwest at 18 knots today. That's a lot for a sailboat," Consie said. "So I believe ... she was sailing it single-handed. And so could have just got into some trouble, tried to secure the boat on the dock, and then it ran into trouble."

A fire department jet ski reached the woman first to assess her condition.  A fire department boat arrived shortly after and brought her to Sky Harbor Airport, where an ambulance was waiting to take her to the hospital.

Consie said they believe she had been sailing alone.  The fire department turned the boat over to the U.S. Coast Guard once they confirmed that no one else was aboard.

The breakwater protects the ship entry between Park Point and Wisconsin Point.  The Minnesota side of the entry cannot be reached by road.